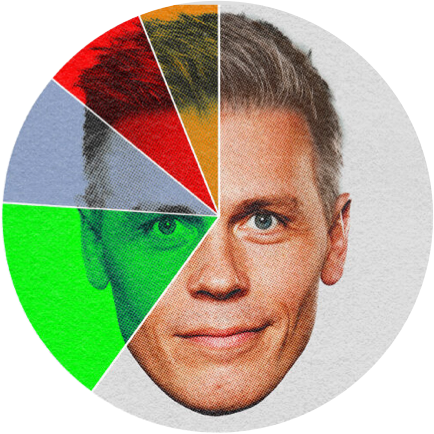 Christian Finnegan is perhaps best known as one of the original panelists on VH1’s “Best Week Ever” and as Chad, the only white roommate in “Chappelle’s Show’s” infamous “Mad Real World” sketch. He played Martin on the popular syndicated sitcom “Are We There Yet?” and politics junkies will recognize Christian from his many appearances on “Countdown with Keith Olbermann”.

Most recently, Christian was the creator and co-host of A&E’s “Black & White”, which examined current events and social trends through the lens of Race. He can also be heard filling in as a regular guest host on “Standup with Pete Dominick” on SiriusXM Insight.

Over the years, Christian has been a fixture on Comedy Central, having starred in his own one hour stand up special “Au Contraire”, as well as “Comedy Central Presents”, “Tough Crowd with Colin Quinn” and countless network interstitials. He’s also appeared on “Conan”, “The Late Late Show with James Corden”, “Good Morning America” and “The Today Show”.

Christian’s comedy albums/specials (“Two for Flinching”,“Au Contraire!”, “The Fun Part” and “60% Joking“) are available on iTunes and Amazon and his standup is in regular rotation on all major streaming services. His latest special “Christian Finnegan: Show Your Work” was released in October 2021.

When not on tour, Christian Finnegan can usually be found in Queens helping his wife, author Kambri Crews, with her venue QED Astoria or walking their faithful pooches, Griswold and Chief Billy Bowlegs.

Atlantic Theater Company, Instructed by William H. Macy and Scott Ziegler (among others).

Staff writer for “Jump the Shark”, a pilot for TV Land, produced by Long Story Prods.

Founding member or The Non Prophets, a successful NYC-based sketch comedy group that showcased at HBO Workspace (LA) and PSNBC (NY), among others.* Full C.V. available upon request.